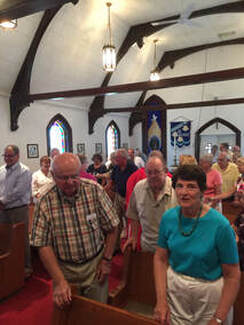 ​St. James is an active parish with a rich history.  The first episcopal service held in Cheboygan was in February 1872 nearly 150 years ago.  The present church was built in 1880. 2020 marked our 140th Anniversary.

Our members range in age from three years old to 101 years old. We come from many different religious backgrounds, yet we are one Body in the Lord serving one another and the community in which "we live and move and have our being."
​

​We are a part of the Episcopal Diocese of Eastern Michigan. Our Bishop Provisional is the Right Reverend Whayne M. Hougland.
The Episcopal church, established shortly after the American Revolution, has its roots in the Anglican Church. The Anglican Church, known as the Church of England, had a strong following in colonial America. But when the colonies won their independence, the majority of America’s Anglican clergy refused to swear allegiance to the British monarch as was required. As a result, the Episcopal Church was formed.